Today was a yuck day.  I’ve been feeling all sick in the stomach and the children have been all feral: watering the washing, emptying tissue boxes, scattering all manner of foodstuffs across the floor and then industriously walking them throughout the house, Harry has resisted all forms of clothing and Christopher Robin has resisted all forms of obedient behaviour.  We were late for school, we forgot half a dozen different forms we were supposed to return and Matilda’s hair was one enormous knot.  Annie was cranky all morning, and then when I finally got her to sleep, Harry decided to break into her room, climb into her cot and ride her like a pony.  And after that, he decided that a productive use of his time would be to pull up and destroy all the pea plants we’d been growing.  There is nothing for dinner and if there was I couldn’t be bothered cooking it.  Everything is a disaster and all I want to do is sleep.

At times like this, there is only one thing to do:  take photographs of bunting.

I’m still fairly new to Blog World, but I’ve just cottoned on to something called “Work-in-Progress Wednesday” and I thought I’d give it a go. 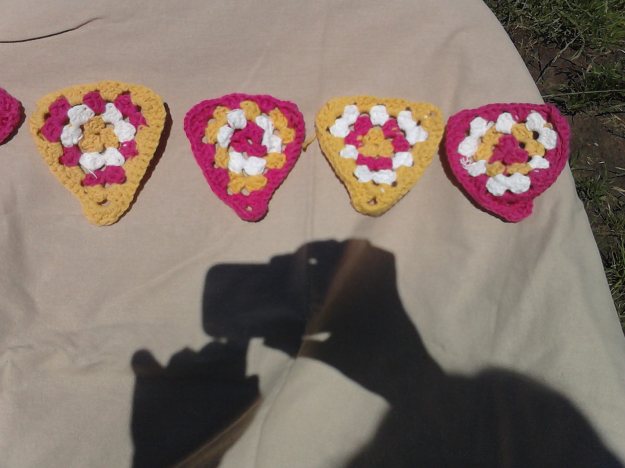 I’m still getting the hang of taking decent photos.  I took my first lot in the shade and the colours were all wrong.  But when I put everything in the sun, I had shadows to contend with! 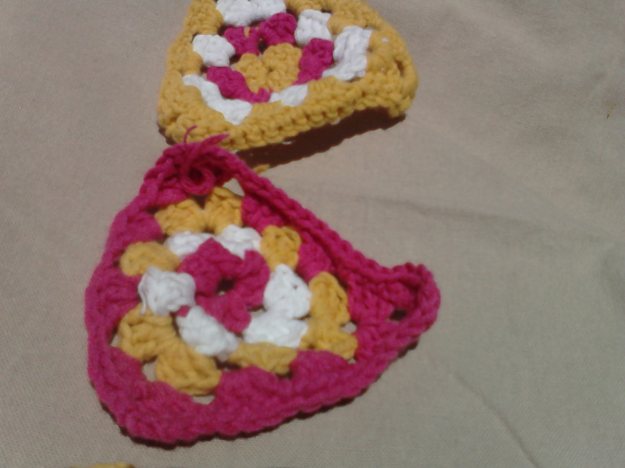 So these little flags are on their way to becoming a string of bunting for Matilda’s room.  They’re made of cotton yarn which I bought years ago to make a blanket but never did.  I used the excellent granny bunting pattern from Hook Knit Spin and was first inspired by Lucy of Attic 24′s creation.  Lucy never did a “ta-da” post for her gorgeous bunting, but it creeps into the background of her pictures for me to gasp at.  You can get a glimpse of it in this post.

So, I’ve still got a while to go before it’s done, but it’s nice, portable work.  Good for swimming lessons and netball games.

OK, must stop hiding from my children (poor Mr Knightley – I practically pelted him with preschoolers the minute he walked in the door!).  I’ll keep you posted on all the bunting love!