I’ve decided if I’m going to be a serious Mummy blogger, I’d better start posting some recipes.  Isn’t that what we’re supposed to do?  Here’s one of my favourites.  My great aunty used to bake apple teacake with me when I was small so it comes with warm and comforting memories.  I always wanted to be the sort of mum (does she even exist?) who has some sort of teacake ‘on hand’ when friends drop by.  Wouldn’t that be amazing?  A girl can dream.

Hmm.  A girl can read a little too much Anne of Green Gables than is healthy for her too.

This particular recipe is gluten free.  Of course, you can use regular flour if you like, but I’m just saying it works really well as a gluten free cake – not all cakes do.

OK, enough waffling, on to the recipe!

My son is incapable of eating an entire apple.  Why finish this one when I can just trot off and start another?   It drives me to distraction.

There are lots of things you can do with these discarded apples, I suppose.  Some people stew them, some juice them, Mr Knightley cuts them up into coin shapes and rebrands them as “apple money” which the kids think is the best thing ever.

But when I was feeling a craving for apple tea cake, I realised all at once that I could make something wonderful from these little green cast-offs. So here we go.

I should probably point out here that these pictures were taken during my first attempt at the cake and I’ve learnt some extra things since then.  The most important point being that you really only need enough half-eaten apple to make up one full-sized one.  I have far too many in this picture!

So: chop off the bad bits (that big apple would have been enough…) 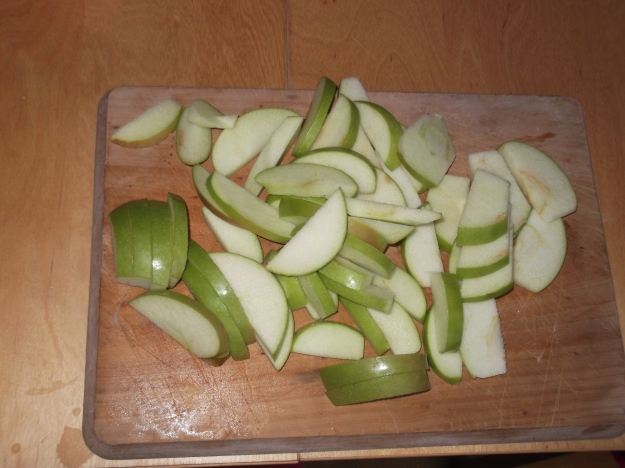 And slice them up.  Slice them as thin as you can – I’ve done it a bit too chunky in this picture.  Why include this picture if it shows far too many apples all sliced the wrong way?  Because I took it, by gum!  Do you have any idea how difficult it is to photograph what you’re doing whilst baking a cake with two little boy helpers?  No?  Well sit down and stop complaining!

Ahem!  Sorry, I got a little carried away there, dear reader.  No more berating, I promise.  Here’s our ingredients list:

You will also need:

A mixing bowl
An electric mixer (handy, but not essential)
A wooden spoon
A 20cm round cake tin, lined with baking paper (the shallow sort you would use two of to make a sandwich cake)

The best thing about this recipe is that you can make it from things you already have in your cupboard.  I have no time for recipes with exotic ingredients!

So beat up the softened butter until it gets a little paler, then add the sugar, eggs and vanilla.  Mix with an electric mixer (or stir up heaps with a wooden spoon). 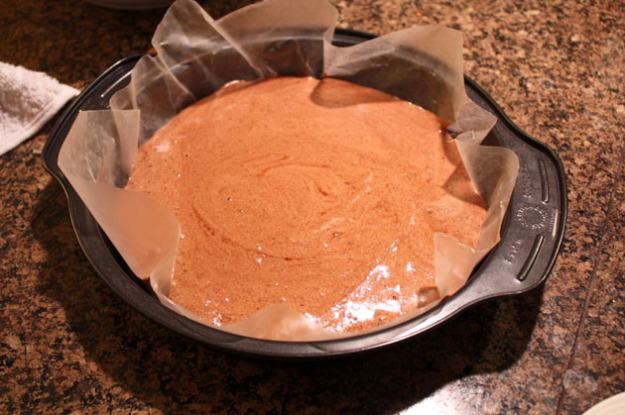 Now pour the batter into the cake pan.  I forgot to take a picture of this stage, so I stole one from the Internet instead.  Shhh.  Don’t tell anyone.

Arrange the apple slices on the top and bake for 25-30 minutes. 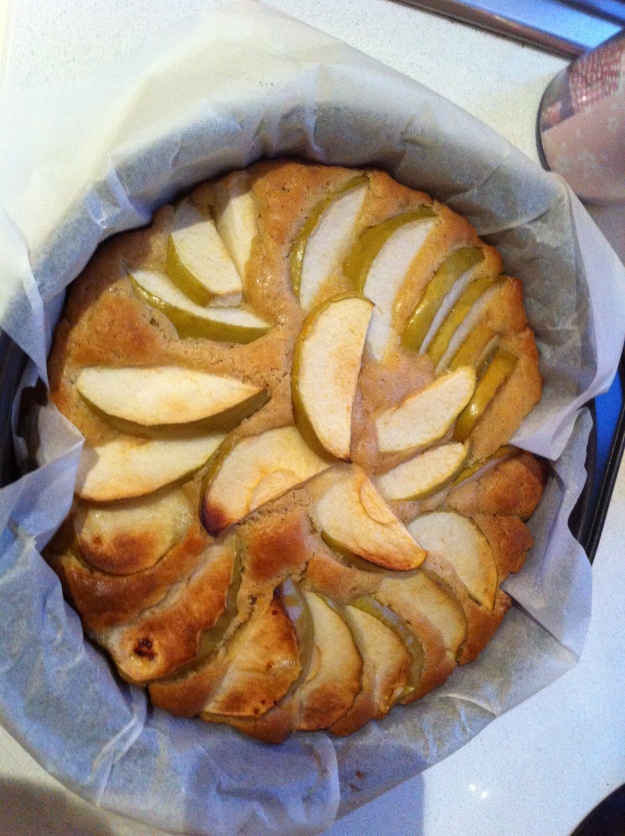 While it’s still warm, rub the 10g (a little knob) of butter onto the cake so it melts.  Or, if you’re like me and forget, melt it in the microwave and brush it on later.  Then sprinkle with the sugar mixed with cinnamon. 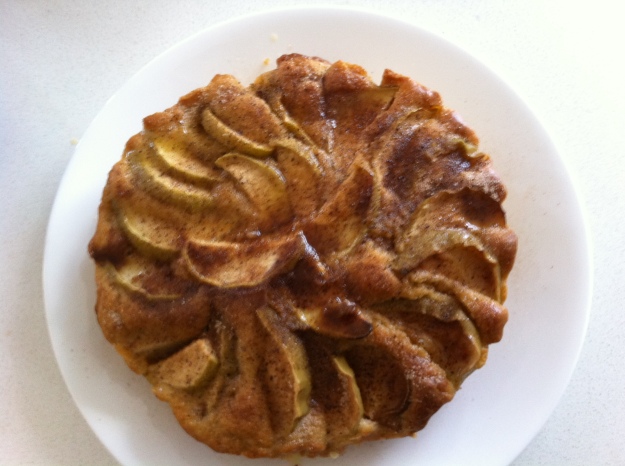 This tastes best if it’s still warm, but still pretty good when it’s cooled.  I made this for my mummy friends on Friday and thus fulfilled one of my life’s ambitions as a stay-at-home mum.  Bliss.

The first time I made this, of course, I had far too much apple left over.

Anyone for apple money?