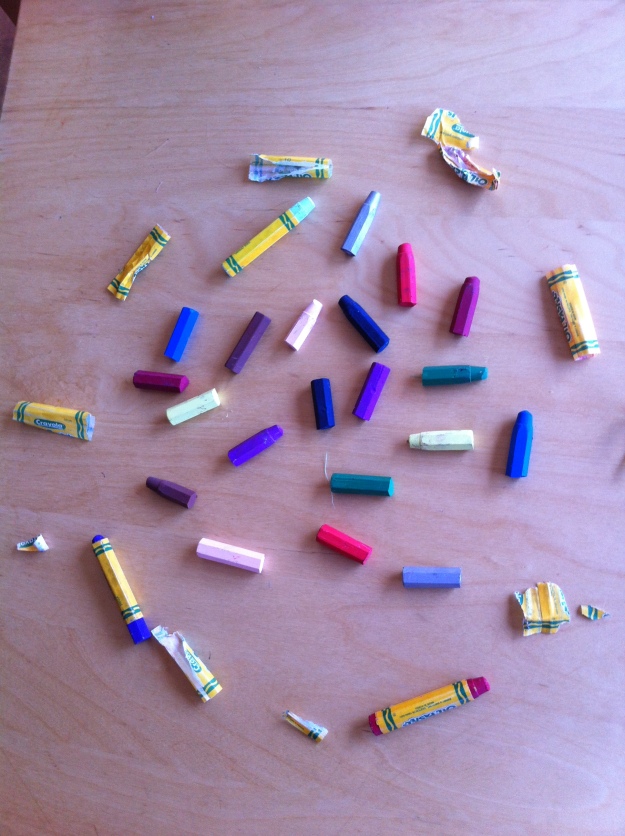 I’m really not enjoying the morning rush before school at the moment.  Today, I returned from my search for Christopher Robin’s grey socks to find Harry sitting in the corner at my little Repressed Creativity table with Mummy’s Special Oil Pastels spread all around him.  He had torn the wrapper off the one in his hand and held it in his two small fists.

“I snap it?”, he enquired animatedly, a mischievous glint in his eye.

“I snap it.”, the wretched imp asserted decisively and broke the pastel clean in half before tossing it on the table to join its fallen brothers.

I managed to get to Harry before he unwrapped his next victim, made a mess of disciplining him (it was mostly me shouting “how would you like me to break YOUR special toys??!” whilst Harry shook his head solemnly and reasoned “they’re MY toys, Mummy.”) and tried to salvage what was left of my lovely pastels.

As I matched aquamarine with aquamarine and crimson with crimson, it seemed a twelve-year-old version of myself manifested itself before my eyes.  There she stood, an awkward figure in her ill-fitting school uniform, clutching her A3 Spirax cartridge paper sketchbook and tin of 72 Derwent pencils to her chest.

“When was the last time you even USED those pastels?” she glowered at me,  “You haven’t even opened the box for months and months!  I think it’s been a YEAR!”

“Look, now’s really not a good time, Twelve-Year-Old Version Of Myself”, I muttered crossly.  And it wasn’t.  It was 8:25am and Matilda was still searching for her shoes, Christopher Robin’s reader still needed to be signed, Annie’s nappy was emitting a suspicious smell and Harry was off hunting for fresh mayhem.  But the sulky tween manifestation of my subconscious was insistent.

“Mrs Flannery said we were good at art.  She said it was in our soul”

It was true.  I had a wonderful art teacher in Year Seven who had been kind and encouraging.  She had looked past my crippling shyness and made me feel like I was special.   And it was also true: I hadn’t used the pastels in at least a year.  My house seems full of empty sketchbooks, untouched paints and blank canvases that my twelve-year-old self would have itched to play with.

I could have argued that I didn’t have the time, that was my usual excuse, but I knew twelve-year-old Kate wouldn’t buy it.  The truth is, I’ve become terrified of Inner Critic.  Inner Critic is another version of myself (it’s very crowded to be me) who usually tells the Twelve Year Old to sit still and be quiet.  She also says things like “what if it turns out you’re no good at art?  Wouldn’t it be better not to try than to find out you’re only average?” and she sighs and sneers and rolls her eyes a lot.  It’s hard work keeping her happy.

Twelve-year-old Kate didn’t have an inner critic.  She just liked to play with colour.

Later, in that beautiful calm after Matilda and Christopher Robin were delivered safely to school, I formed a resolution.  Throughout the month of August, I will create some sort of art once a week, photograph it and post it on my blog.  And if Inner Critic has any comments to make, I’ll just say “quiet, you!”.  I’m a great admirer of proper-artist Ruby Hoppen, she is creating a portrait of her son every week this year.  It’s amazing to behold.  That’s where I got this idea.  But I won’t be doing portraits, and I’m only going for a month, but other than that…

If any other of you lovely bloggers would like to “play along”, please let me know in the comments and I’ll link to you.  You don’t have to be arty, that’s the whole point!  I think I’m going to call it “Art in August”.  Or maybe “Amateur Art in August” 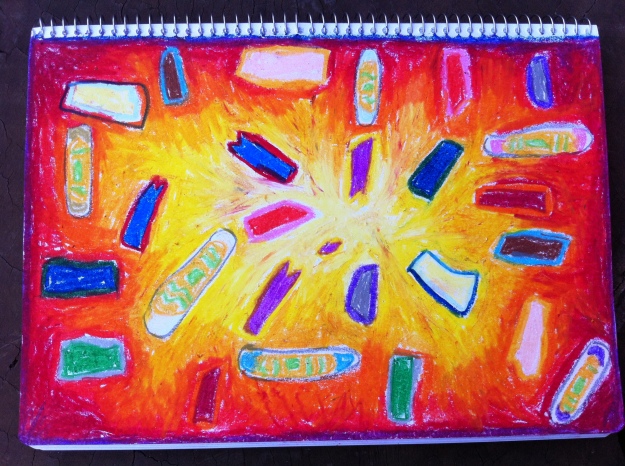 And, in celebration of this decision, here is my first piece.  It commemorates the destruction of my oil pastels and the miniature art festival this event inspired.

I call it “Shattered”.