Phew!  It’s been a long time since I’ve sat down to my lovely laptop (or set up an ironing board, for that matter).  Things have been a little topsy-turvy in my world over the past couple of weeks.  My beautiful grandmother passed away a week and a half ago and the days that followed have been a big mess of eulogy-writing, funeral-planning, grieving, consoling, remembering, smiling and laughing.  Jan, Greg and Bobby all flew home and all six of us spoke at the funeral, which was just beautiful. 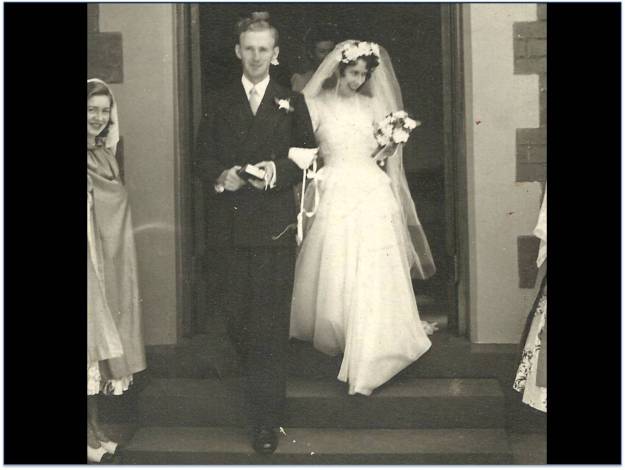 I’m starting to feel now like my head is starting to come above water again and I’m finding comfort in the return of routine.  The dirty washing that was spilling out of the laundry door is now clean washing in several piles all over the kitchen table and family room couch, so that’s progress, I guess.

More importantly, I’ve ventured back into Blogland.  Oh, how I’ve missed you all!  I feel terrible for abandoning Art in August, when I was the one who started it up.  I figure I’ll just ignore the calendar and pick up where I left off, spilling into September if I need to.

Just to remind you, my fellow art bloggers are:

Naturally Cathy of The Plucky Parent,

Michaela of the mmmmm family,

Katy from Sourdough Lifestyle, and

Plus, since my last post, another blogger has joined in.  Ruby Doom from The Hippy Geek has done some most excellent rock painting which is definitely worth a look.

Here is my entry for week two.  It’s called “Vigil”

I sat with Mama on the night she died.  It was a privilege to spend her last night by her side.  The room was filled with aromatherapy scents and peaceful music.  The nurses were quietly attentive to Mama’s needs.  There was such a feeling of peace and prayer in that room.

Thank you for your patience, lovely readers.  I’ll be back soon, I promise! 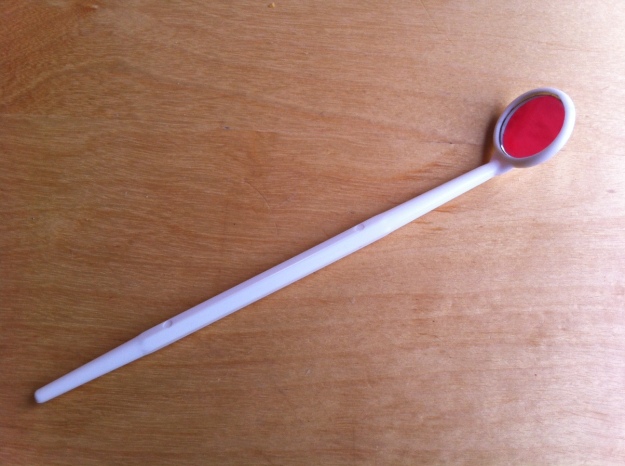 So, um, here’s the thing.  My three year old has a hole in his tooth.  I don’t know if it was one of the many party-bag lollies I irresponsibly let him eat or one of the many times I forgot to make him clean his teeth, but somewhere along the way, my extreme maternal neglect resulted in a tiny hole in his tiny tooth.  And he’s scared of the dentist.  And I think that might be my fault too.

A couple of weeks ago, I took him and his brother and sisters to the dentist for a check up and clean.  Harry didn’t want to sit on the special chair, didn’t want to wear the special glasses and only opened his mouth for long enough for the friendly young dentist to ascertain that we would need to make another appointment and that, in the meantime, I would need to feed him lots of pro-dentist propaganda (and, um, no lollies).

Which brings us to yesterday.  I had worked as hard as I could to engender pro-dentist sentiment in the heart and mind of my son.  Harry sat solemnly on my lap as I showed him this bizarre youtube educational video the dentist had recommended.  I chatted happily about friendly dentists and their special chairs and did you know the dentist can put a tiny little train in your mouth that can run over your teeth?  Just like Percy!  And best of all: little boys who open their mouths for the dentists get to have McDonalds for lunch!

I gotta tell you, I was feeling a little conflicted about this.  I know this fast-food giant pours billions of dollars each year into the targeted marketing of children.  I know there’s a clear strategy in their meals with toys and play equipment and children’s birthday parties and red stripey clowns.  And I know the very reason I was turning to this multinational corporation to provide a treat for my little boy is because of the subliminal messages their glamourous ads and marketing placed in my brain when I was a little girl.  In providing fast food as a “special reward treat” to Harry, I am programming him to become a lifelong consumer of this nutritionally bereft product.  I am doing just what their billion-dollar marketing department wants me to do.  But desperate times call for desperate measures.

As we walked into the waiting room, I exclaimed in joy with Harry over the colourful fish in the little aquarium.  “This place has got everything!  I love going to the dentist!”  I tried my best to exude upbeat, cheerful anticipation with an undercurrent of calm, reassuring all-is-well.  I think I might have strained something.

It wasn’t long before we were called into the little dentist’s room.  No, I think that should be “dentist’s little room”.  The dentist herself was of average size.  Our first job was to convince Harry to sit in the special chair.  But Harry wasn’t buying it.  “It’s a fun chair, like a rocket!” and “Just like the girl in the video!” had no effect.  Harry crawled nervously on to my lap and suggested that Annie sit in the chair instead.  In the end, I sat on the chair and Harry sat on my lap.  But I could tell he didn’t like it.

As the dentist handed Harry his “special, cool sunglasses” and tilted the chair backwards, I talked to Harry of the wonderful Happy Meal he would earn when he opened his mouth for the dentist.  Did he want nuggets or a burger?

“I would like a burger!”  Harry exclaimed with characteristic enthusiasm, “and Annie wants some nuggets.  And you can have a chip, Mummy.”

“OK, now, Harry.  It’s time to open your mouth.  Why don’t you pretend you’re about to take a big bite of your hamburger?”, chirped the dentist.

Harry pressed his lips tightly together.

“Come on, Harry” I said, “if you open your mouth, I will even buy you an ice cream at McDonalds!”

“I love an ice cream!” Harry whispered excitedly.  But he still wouldn’t open his mouth.

I think it was at this point that the nurse chipped in with promises of stickers.  She needn’t have bothered.  If Harry wasn’t budging for a happy-meal-all-to-himself, no adhesive picture of a Looney Tunes character grasping a toothbrush was going to change his mind.

It was time to pull out the big guns.  “Harry,” I said solemnly, “if you don’t open your mouth for the dentist, you’ll get no McDonalds and have a plain sandwich for lunch instead.”

“WHERE’S MY SANDWICH?!”  Harry flung off his special sunglasses. “I need to get out of here!”

“Come on, Harry,”  the dentist coaxed, “just let me put this special mirror in your mouth…”

Then she stopped and scratched her head.  Harry had pulled his t-shirt over his face.  “I want to go home.”  a muffled voice said stubbornly.

Ten minutes later, I stalked out of the dentist, making a long mental list of all of the things I could have bought with the thirty dollars I’d just paid.  What am I going to do?  How on earth am I going to brainwash my son into thinking the dentist is his friend?

If only I could hire a McDonalds marketing consultant…

Here (at last) is my first entry for the Art in August challenge.  As you may know, I’m playing along with Naturally Cathy of The Plucky Parent, Selene (セレネ) of Kawaii Kuni, Red Lipstick Mama, Michaela of the mmmmm family, and Allison Profeta of Allison Road.  Make sure you have a peek at their blogs, because there’s lots of good stuff going on there.  Since my last post, we’ve had some more bloggers join the fun (!!!!!!):

It’s not too late to join in!  Just leave me a comment – c’mon!  It’ll be fun!  Also, if you’ve told me you’d like to be involved and I’ve somehow overlooked you, please remind me – I didn’t mean it! 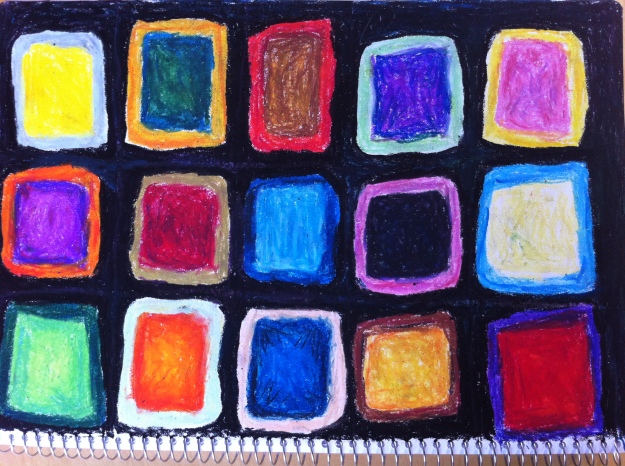 Here’s an abstract piece done in oil pastels.  I call it Fifteen.  I got most of this done last week at the hairdressers.  It was sooooooooo relaxing.  The hairdresser asked me about what I was doing and I tried to tell her the whole story I wrote in Resolution.  It was around the time I was clumsily trying to describe a vision of my twelve-year-old self that I realised that some things are better written down and never spoken of again.  The hairdresser looked vaguely concerned for my mental wellbeing.

And, because it would seem these days I can’t do anything by myself (bathroom time is a spectator sport in this house).  Matilda and Christopher Robin would also like to share their contributions. 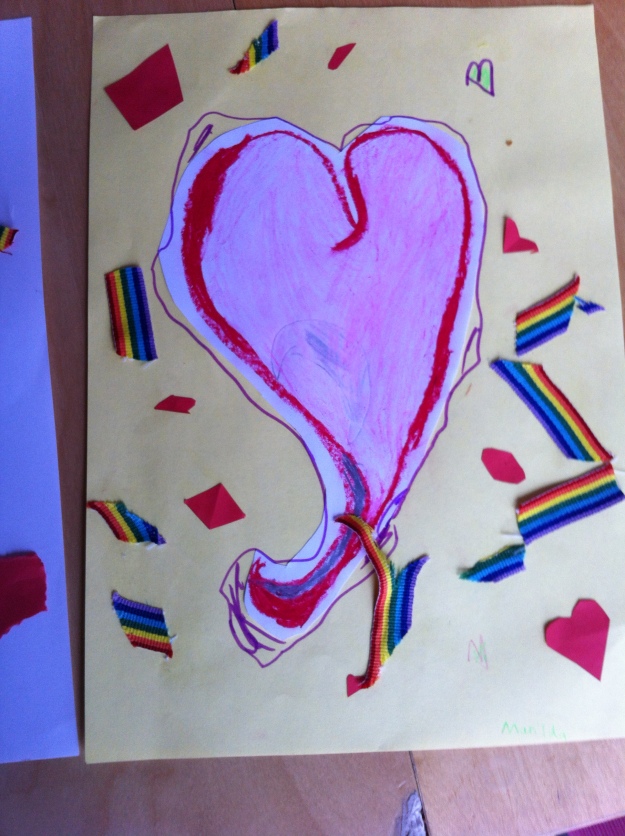 She even signed it with her blog name!  It’s very important that I point out that the purple texta outline was Christopher Robin’s contribution and the cause of much angst at our kitchen table.

I have a brand-new ‘Fail’ post coming soon.  I forgot to tell Harry to stop giving me such prime material – I have enough to be writing about at the moment!