Oh, this was going to be such a beautiful post.  A visual delight.  Truly Pinterest-worthy.  You would have been really impressed, I promise you.

You might remember Meghan from Mathair Fiona if you stretch your mind back to last August, when we had our Art-Along.  One of Meghan’s art works was a photo of her canned produce (do you still say ‘canned’ when it’s in jars, or is there some other word?  ‘Jarred’?).  Pretty little rows of jars on a shelf.  At the time I remember feeling wistfully about how nice it would be to make my own preserves, just like Anne of Green Gables.  How very wholesome.

Well, a couple of months ago, Meghan put out a challenge: I’ll Give You Six Months, You Give Me Food in Jars.

This approximately describes my thought process:

A street near my house is lined with crab apple trees.  Every year they put out a bounty of fruit.  Every year, Chinese families gather to reap with buckets and baskets and long-sticks-with-hooks and still the little red gems are everywhere, carpeting the footpath in their rosy (and, later, brown and squishy) abundance.  Every year, I promise myself that next year will be the year when I join in this suburban harvest and finally get around to making crab apple jelly.

Crab apple jelly.  When I was little, my dad’s Aunty Lal, home cook extraordinaire, would somehow create these little jars of magic from an otherwise inedible fruit.  It would taste delicious spread on her fresh-baked scones, but, more than that, it looked beautiful.  Clear and rose-red.  In my mind’s eye, I saw how my jars would twinkle on the pantry shelf like rubies.  I saw myself giving the jars away as considerate little presents.  I saw myself becoming one of those people organised enough to give considerate little presents.  I saw this and I couldn’t unsee it.  I had to make it happen.

Every day, the children and I would watch the progress of the little apples as they grew and turned yellow, then orangey, then gradually more red.  I would tent my fingers and cackle “Soon, my little pretties, soon!”.  And the children would giggle, under the mistaken impression that I was joking.

I got a little panicky when we went on holidays for a week just when the fruit was getting ripe.  What if we missed the boat?  What if we came back to find empty branches and rotten fruit?  I had already signed up to the “Of Course I Can!”  challenge, what would I do?

I want to be her

Relief came the following Thursday when I arrived home to see the dinky little trees still as fruitful as ever.  We were going away again after Easter (this was Holy Thursday, you see – yes, I know, it’s taken me a while to get this post up…) so we only had a little window to go apple-picking in.  At least, that’s what I thought.  As it turns out, we needn’t have worried.  These trees stay in fruit for a long time.  As I write this, almost a month later, the trees are still laden with little red apples and don’t look like they’re going to stop any time soon.

We didn’t go the following day because, as Christopher Robin announced solemnly, “It would be too much fun to do it on Good Friday”.  Also, it was bucketing down rain.  It was seem that Holy Saturday was to be our Harvest Day.

Thus, it transpired that on Holy Saturday, whilst Mr Knightley was at the garden supplies store doing Manly Things, the children and I rugged up in raincoats and gumboots and grabbed fruit-bearing vessels of all sizes and marched up the hill to collect our bounty. 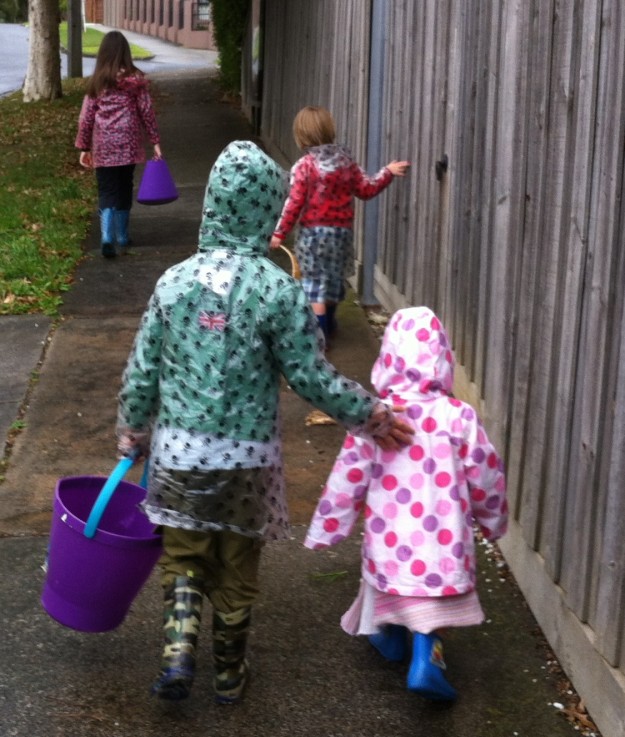 And, oh, we had so much fun!  There are times (often closely connected the state of the living room floor, the state of the school-notices-pile or the state of my hormones) when I doubt myself as a mother, when I worry that I’m not doing the right thing by my children, when I feel like a failure.  This was not one of those times.  I felt so satisfied and smug.

The children were beside themselves with glee and so engaged in the task.  Christopher Robin and Matilda had clambered up a tree and were sitting in the branches making a verbal list of all the people they would give jars to.  They had draped plastic bags over twigs to collect their pickings.  Harry sat on a lower branch.  There were no crab apples within his reach so we got up a system.  Harry would badger me to pass him a ‘cwabappoo’.  I would reach up into the branches, pluck off a small bunch and pass them to him.  Harry would then toss the crab apples towards the bucket at the foot of the tree, invariably missing his mark.  Annie, tottering around under the tree would gather these fallen treasures and deliver them to the bucket.  Harry would badger me again.  As far as systems go, it was not, perhaps, the most efficient method, but it kept them entertained. 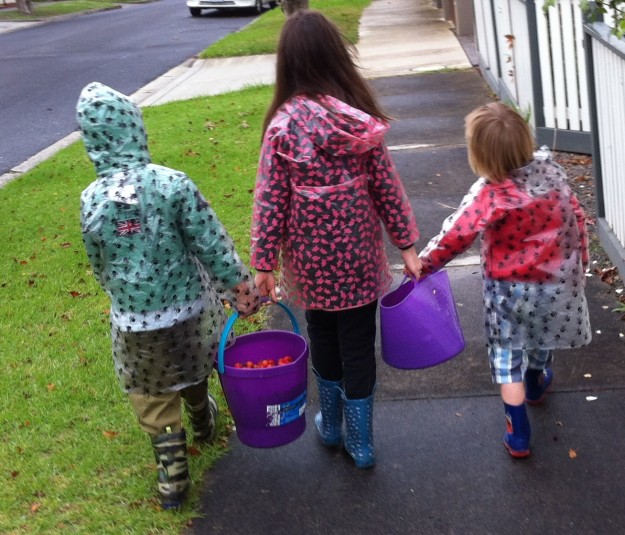 When we got back home, the kids got to work washing the crab apples and choosing the ‘premium’ ones.  Meanwhile, I had another look at all of the internet tutorials for crab apple jelly.  In the end I picked this one and got to work.

As I stirred the simmering apples, I started to daydream about how I would dress up all the pretty jars.  Would I use fabric or little crocheted caps on the lids?  Ribbon or vintage lace?  I’d seen a cute way to decorate jam jar covers with paper on Pinterest, but of course, that wouldn’t work when it came to sterilising the lids.  The labels would need to be attractive too.  Hand-written on pretty paper.  The hand writing was important.  It would convey a certain nonchalance: “sure, I make this sort of thing all the time!  No need for printed labels – I haven’t given this a second thought!”  Mmmmmm…

After a while, it was time for much mush mashing.  Everybody took a turn and everybody got bored and everybody’s arms started to ache.  When we were sufficiently Over It, I decided it was time to strain the mix.  I poured the sludgy goop into a damp pillowcase and waited for Father Time to work his magic. 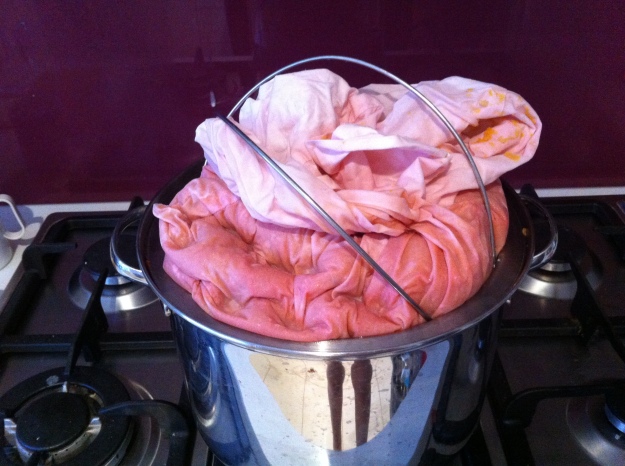 Two hours later and the sludge hadn’t budged.  There was no steady trickle, no drip-drip-drip.  I poked and I prodded, but to no avail.  I decided to leave it overnight.

Here is a picture of the juice I collected the following morning:

Just so we’re clear on scale: this is a 2-cup capacity jug, not one of those 2-litre ones.

I glumly put this jug of my gleanings in the fridge and went away to Warrnambool for a few days.

When I came back, it was with renewed determination.  So what if I only made enough jam for everyone to get one taste?  We had worked hard and we needed something to show for our efforts!

I needed to do some tricky arithmetic to work out how much sugar to add.  The measurements provided were for each cupful of juice.  I didn’t have enough juice to make up one cup.

I was no longer thinking about pretty jars and lovely gifts.  As I stirred, I thought moodily about the fact that crab-apple jelly probably wasn’t even FODMAP-friendly, much like most of the things you might spread it on.  The recipe said to simmer and stir for at least fifteen minutes, but after ten I had a feeling it was ready.  I let it go for a couple more minutes just to be sure and then poured it into my one, lonely, sterilised jar.

After it had cooled, I gathered the children around the precious jar.  I wielded the butter knife with a solemnity that befitted the occasion.  As the knife struck the surface of the jam, it made a strange sound.  The jam was solid.  It would seem i had overcooked the mix.  Several day’s effort had yielded one dirty pillowcase and 50 millilitres of solid jam.

Anyone for crab apple toffee?

PS.  I decided the ending of this post is just too tragic.  We did give it another go, with more successful results.  Matilda is going to write all about it soon on her blog.