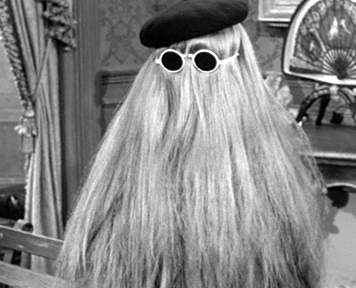 I really need a haircut. It’s becoming ridiculous.  This morning, when I was putting my jeans on, my pony tail got caught in the waistband.  And my hair keeps getting involved when I try to eat soup, it just sort of drapes itself into the bowl.  Plus it’s the wrong colour.  I’m supposed to be blonde, but my hair seems to ignore this fact.  Now the wrong-coloured roots have grown past my shoulders.  The wrong colour has taken over.  I try to tell people it’s ‘ombre’ or ‘balayage’, but really it’s the ‘avoiding salon’ effect.

You might think it sounds glamorous, but it’s not.  It was all very well when I was pregnant.  Double-pregnancy hormones made my hair all glossy and full of body (I was full of body everywhere, it would seem).  And, what’s more, I had a legitimate reason for not getting my hair done.  I was far too pregnant.  But once the twins were born, all my pregnancy hair fell out and gathered in tumbleweeds about the house.  My look was no longer “Pregnant Gisele Bundchen On Her Day Off” rather “Drab But Pious Homeschool Mother Sews Aprons For Her Sister Wives”.

I know I would feel better if my hair were shorter and back to its proper colour.  I know all I have to do is work out a time and pick up a phone and make an appointment and turn up, it’s just that…

Hairdressers make me nervous.   There.  I said it.

Most of the time I’m a confident, articulate person and a great conversationalist.  But something about a room full of blow dryers and the smell of Moisture-Lock Colour-Hold Super Salon Treatment Spray sends me spinning all the way back to Grade Five.   My tongue gets all thick.  I don’t know what I’m supposed to say.

And I already felt like an odd and awkward sort of person when I went to the hairdressers before I had six children and decided to homeschool them.  Now I feel like a total freak.

I’m intimidated by the amount of power the hairdresser has over me.  A hairdresser has the ability to affect how you feel about yourself when you look in the mirror for the next six weeks (or, in my case, two years).  Just how much bleach is she putting in that mix?  What does she mean ‘caramel highlights’?  What if she interprets my request for ‘layered cut’ as ‘Warwick-Capper-Mullet’?

I tried to tell my friend M about my problem a couple of days ago, when she told me I needed a hair cut.

“Is it too expensive?”

“Do you need babysitting?”

“Do you just want to keep your hair the way that it is?”

“Well, what’s the problem?  What?  What?  I can’t hear you.  Did you just say you’re frightened of the hairdresser?”

Later that day, I got a text from Lovely M.  It was a link to a groupon for 75% off colour and cut at a salon not too far away.  M offered to come with me and I was struck with a lovely vision of the two of us side-by-side with our hair in rollers and our heads underneath those bonnet hair-dryers, discussing that new band from England and whether we preferred Paul or Ringo.  But after a few more texts, it dawned on me that M was not offering to get her hair done at the same time as me: she’d just been to the hairdressers, it’s what had sparked the conversation.  M was offering to come along to hold my hand (her words).

It was at this point I realised I might have a problem.

“I can do this”  I muttered to myself as I clicked my way through the sign-in process and keyed in my credit card details, “I am a GROWN UP.”  And, ignoring the bland stares of the other people in the library, I triumphantly purchased my ticket to several weeks worth of good-hair-days.

It was only when I googled the name of the salon to find out the opening hours that I began to feel some reservations.  The business had quite a lot of online reviews.  There were three gushing five star reviews; the same number of reviews, I imagine, as of staff who work there.  All the rest were scathing one-star reviews.  Reviews that said the hairdressers were ‘rude’ and ‘mean’.  I gulped.

“So anyway, I bought that groupon.” I announced, a little smugly.  My tone also said “See?  I’m totally capable.”

“When are you booked in?” she asked (a little knowingly, it must be said)

“Um, well, actually I haven’t booked it yet…”  I stammered.  The smugness was fast evaporating.

I haven’t been yet.  My hair is still getting snagged on door knobs and looking far too brown.  But I will go.  I figure if it’s a bad experience, it will make a neat sequel to this blog post.  If it’s a good experience, I’ll have nice hair again.  It’s win-win.  So I’ll go.  I’m totally going to book it.  All I have to do is pick up the phone and arrange a time.  And I will, I totally will.