Note – I wrote this one a month ago and am only just getting around to posting it now.  Hence all the references to “Advent” and “December”.  I tried to fix it, but it was getting too complicated.  I hope you can cope with this blast from the past…

My fingers have been very busy this Advent season. Here’s why:

1. Something about Christmas fills me with the urge to create things with my hands.

2. I prefer to spend my time with a bag of yarn and a box set of Little Dorrit than doing battle with a shopping centre car park.

3. I get to tell myself I’m being all anti-consumerist and sticking it to the man.

4.  I’ve been invited to two weddings this December, and as a result have NO MONEY for expensive presents.  All my money fell down the wishing well…

Here’s what I made for Harry’s and Christopher Robin’s teachers:

These angels are TOTALLY MY OWN PATTERN.  I’m so excited!  OK, so maybe I got lacy wings idea from a book I got from the library and I did steal Lucy Ravenscar’s method of joining the head to the body without fastening off, but the rest of it is ALL ME.  If you look closely, you can see that some of the angels have different body-types – it took me a while to refine the pattern…

We also gave them gingerbread in jars, using The Green Dragonfly’s excellent recipe.  All of the kids helped to make these.  Annie ate all her dough, and Christopher Robin got rather creative in his choice of biscuit shapes, but I bit back the strong urge to fix the wonky ones and let them roll and cut to their hearts content.  We decorated with white fudge writing icing, but I wouldn’t recommend it (it doesn’t set properly).

All of the teachers were very happy with their Christmas presents, and I was glad of the opportunity to thank them for taking care of my boys this year.

Stay tuned for more – I’m afraid you don’t have a choice!

Please excuse my very long absence.  I’m on summer holidays at the moment and it’s been a little difficult to blog amongst the anarchy.  I have a few longer posts on the way, including a Fail post, a God post, a Holiday post and a Newsy post, but in the meantime, here is a completely self-indulgent one.

Here are some handmade gifts I wanted to brag about:

This is a crochet star garland I slipped in with my sister-in-law’s KK present.  It doesn’t really do anything and it kinda looked better in my head than in real life.  The stars are a mix of Lucy from Attic24’s very addictive Little Lacy Stars and my own Star Snowflake.  You can’t see it very clearly in the picture, but the ribbon is a sweet blue-and-white check pattern.

I made some more Lacy Stars (I told you they were addictive) for my mother-in-law (“Mrs Knightley”?).  Do you remember this tree from last year?  I don’t know why I didn’t choose red the first time around.  It looks so much better.

These presents don’t really deserve to be included, as I didn’t make them myself, but I couldn’t resist.  These were Christmas presents for the ladies at Harry’s occasional care.  I gave them Pippi’s handmade soaps (like what I gave away on my blogiversary) and wrapped them in lunch bags with nice ribbon.

Here are the presents I gave Harry and Matilda’s teachers (Matilda had two teachers this year).  This photo is a bit dodgy.  I made the lid covers in purple yarn, but in this picture, they look blue.  The gingerbread is baked from a recipe I found on The Green Dragonfly, which is awesome and I will use always and forever until the end of time.  And I drizzled melted white chocolate on top.  Can you tell from the shape that they’re supposed to be stylised Christmas trees?  Maybe if you squint a little and turn your head to the side?  I get a little tired of rolling out all the waste dough again and again when cutting biscuits, so I chose a shape that tessellates to save me time.  Efficiency plus!  I tried to explain this method to several people over the course of Christmas, but their eyes all tended to glaze over, or dart about desperately for someone who could save them from the conversation.  I think it’s interesting…

And at last, the pièce de résistance.  I made this bunny – who might bear a remarkable resemblance to Peter Rabbit, but for any lawyers from Beatrix Potter’s estate who may be reading, I will refer to only as George – for Lovely M’s son, who is Christopher Robin’s best friend, and who actually happens to love Peter Rabbit, when he’s not trying to act all grown up.  This was one of those situations where the idea for it flew into my head and then I just couldn’t rest until I had created it.  I followed Greedy For Colour’s Flora Rabbit pattern (one of my favourites) and then invented limbs and a cardigan to transform Flora into Peter (I mean George!).  Lovely M’s son was suitably impressed with this gift (although he tried hard not to look too much so in front of Christopher Robin, until Christopher cheerfully mentioned his own favourite toy dog who still sleeps with him) and I’ve been assured that Peter/George has been fed carrots at the table every night and goes to sleep in his owner’s bed.

And that’s it!  I should probably mention, before you start feeling too impressed, that I failed to send any Christmas cards at all this year and I’m pretty sure there are some people I’ve lost touch with who think they’re no longer on my list.  Maybe next year I’ll be better organised…

So Matilda turned eight last week.  My baby girl is now officially a tween (ugh! I hate that word!).  And this year is a party year

As we have spent a good deal of Matilda’s lifetime rebuilding our house, this would be our first chance to have a proper “home party”.  And I really wanted to make it special.   Matilda and I could decide on a theme together and then I would hit Pinterest with great vigour!

So when Matilda suggested that she would most like a party in the evening, when she and her friends could eat pizza and watch a DVD, I felt a little crestfallen: it was a great idea, but it all sounded so very grown up.  Had my baby girl outgrown cupcakes and Pass the Parcel?

Matilda must have seen the expression on my face because she put her hand on my knee.  “Don’t worry Mummy,” she said soothingly, “you can still put up bunting if you want.”

I soon cheered up when I started to think about it.  The girls could wear their pyjamas and bring their favourite soft toy.  We could call it a ‘star light’ party and put up fairy lights and pretty candle lanterns and have star-shaped glitter everything!

In the week leading up to the party, I set to work getting ready.  I shopped, I made a big batch of gingerbread stars for the girls to decorate (I cut the star shapes and put them on the tray, Harry cut them and put them in his mouth); I baked a cake (Nigella Lawson’s Dense Chocolate Loaf Cake, because I was trying to channel Nigella, don’t you see?), I poured jelly into my lovely vintage-Tupperware jelly mould (ditto).  And I cleaned like you wouldn’t believe.

You see, Other Mothers would be coming to my house for the first time.  And many of these Other Mothers had not already formed (bad) impressions of how I keep house.  Yes, I know: vanity, thy name is Kate…

I have been known in the past to write out a full running sheet for my kids’ parties and I had every intention of doing the same for this one, but in the end I ran out of time and had to content myself with a sketchy timetable.  They would decorate biscuits when they arrived, then snuggle down and watch a movie with snacks and cosy blankets, eat pizza in the intermission, watch the rest of the movie, sing Happy Birthday and eat cake (and jelly!) and then go home with their lolly bags, happy and contented and full of good cheer.

I had been a little stuck on what to do for the birthday cake.  So I asked my friend, Jack Sprout (from Beautiful Parties Magazine) for advice.  And, oh, her face just lit up as her brain fired off one beautiful, creative idea after the other.  And her enthusiasm was infectious.  In a frenzy of inventive zeal, we decided on a bed-shaped cake with royal icing (the type you knead and roll out) for the cover and a tim tam for a pillow.  Then Jack almost fell over and couldn’t talk – what if I put a little crochet bedcover on top????

We both went home to think about what to do about the bed head (I deal with serious issues in my line of work).  Biscuit stick bed posts? A block of chocolate? Cardboard?  Then Jack called me on the phone: “this is probably a little over-the-top, but what about gingerbread?”

Yes, Jack, I thought, that is a little over-the-top.  I will not be making gingerbread. And I went out and bought a packet of bedpost-shaped biscuit sticks.

But I couldn’t get the idea of a cute storybook bed heads out of my own head.  With little cut-out hearts.  And then I figured I’d be making gingerbread stars anyway, and Jack had loaned me her very-cute biscuit cutters, I might as well make a bed head as well…

Incidentally, I used this excellent and very simple recipe from The Green Dragonfly.

This is the only picture I took on the night of the party and it’s not a very good one.  I’m really cross at myself for not taking any more pictures, which is why I’m probably going to be spending more time writing about this party than would be interesting to read about. 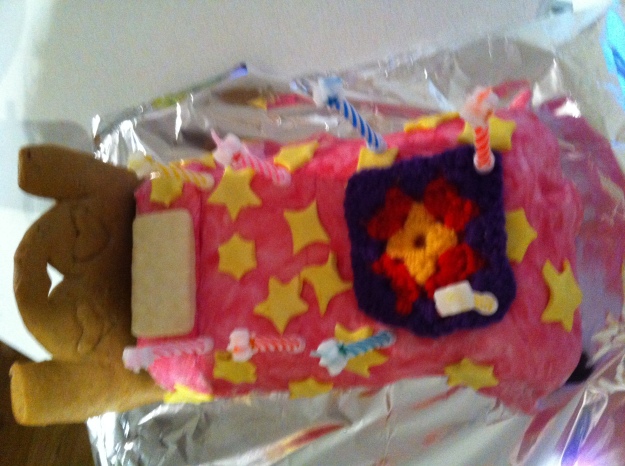 It doesn’t look as beautiful as it did in my mind.  I made a mess of the icing (how are you supposed to evenly dye that stuff?), the gingerbread got a little wonky, and I never made the tiny string of bunting I’d planned to hang between the bed posts (it would have looked so sweet!), but I did remember to put tiny teddies on the bed (after I took the photo, alas!) and Matilda was properly delighted with the whole rigmarole.

On the day of the party, we worked like crazy.  I strung up some fairy lights (from the Christmas tree) whilst Harry and Christopher Robin stuck star-shaped decorations (post-it notes) all over the house.  Matilda put lollies into little paper bags, Christopher Robin stuck star stickers on the little paper bags and Harry took the lollies out of the little paper bags and ate them.  I carefully vacuumed and put down a table cloth with the star biscuits, cachous beads and little tubes of ‘writing icing’.  I put the DVD (Disney’s Brave) into the DVD player.  Then we all put on our pyjamas (Matilda had a pretty new pair especially for the occasion).

And the little girls began to arrive.

But the scene is set, at least.