I have this thing about label makers.

Something about those neat, white strips, calmly stating important facts in no-nonsense typeface just speaks to me.

I figure if I were to own a label maker, I would finally become Organised Lady. My household would run like a well-oiled machine. My children would arrive on Book Week Day wearing elaborate hand-sewn costumes. Friends would pop over for a spontaneous catch-up to find me relaxing in an immaculate house, the smell of a delicious, healthy treat wafting out of the (shiny, clean) oven.
I wanted that label maker.

But, I remonstrated with myself, such things really are an expensive extravagance. There really isn’t much I can achieve with a label maker that I can’t also achieve with a permanent marker and a roll of masking tape…

And I almost believed myself.

But then, last week, Mr Knightley casually commented that he’d seen label makers on special at the local stationery emporium. Was that something I could use?

When I had fully recovered my powers of speech, I reassured Mr Knightley, in an abundance of words, rapidly spoken, that I did indeed covet – er, need – such an object.

Oh, just look at it.

I didn’t know it was going to be pink. I know it’s childish, but I love it when things are bright pink. I was thoroughly over-excited by my new acquisition.

But I wasn’t the only one.

It started when Harry took my label maker to a quiet corner, typed out the entire alphabet and then printed several labels to commemorate this achievement.

I admonished Harry, confiscated the label maker and placed it high out of reach.

The next time I pulled down the label maker, Harry was ready. The first moment my back was turned, Harry absconded with it to further investigate this mechanical wonder. This time, he managed to jam it all up. I firmly resolved, as I extracted scraps of twisted labels with my eyebrow tweezers, to keep the precious contraption out of reach at all times on the top shelf of the pantry, next to the Milo tin.
Which brings us to this morning.

After coaxing a particularly reluctant Annie out of a dirty nappy and into her cot for a sleep, I returned to the kitchen to find Harry covered in Milo. In the moments that followed, I took in the following information:

Here’s what happened next:

I had a read over the warranty, but there’s nothing in it to cover the wanton destruction brought about by insane two-year-old saboteurs…

My one consolation is that Dymo – or, indeed, Milo – might approach me with an endorsement deal for introducing my readers (yes, both of them!) to the wonders of their product.

Perhaps they could pay me in label cartridges? 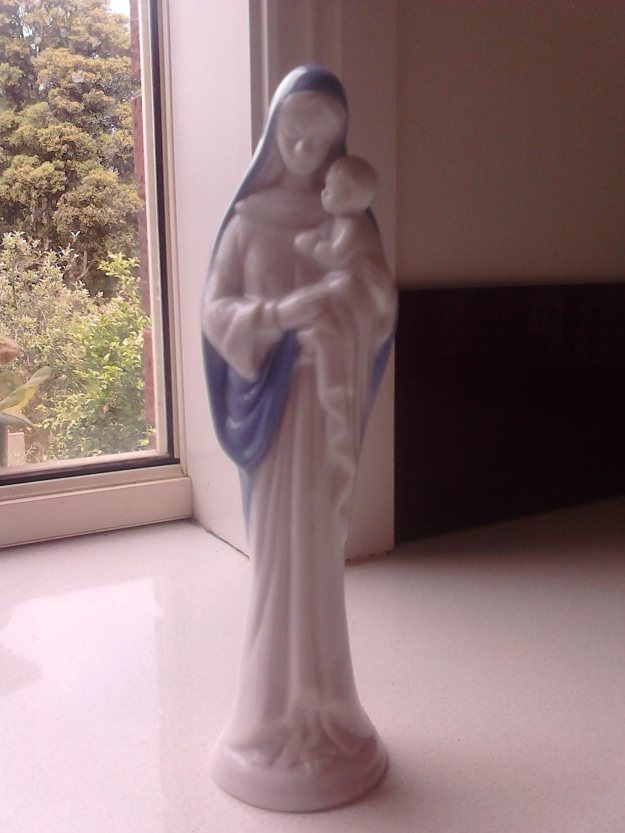 I have a Mary in my kitchen.

I didn’t mean to make my first “God in the Mess” post about Mary.  I can’t imagine many of the people out there who read this are Catholic (well, Mum is) and I figure I’m pushing the boundaries enough, writing a ‘God’ post without coming out of the closet as a full-blown Catholic.  But here we are.  I have a Mary in my kitchen.

I know we’re talking about a piece of ceramic, here.   I don’t get all superstitious about it and bring her cups of tea or rub her head for good luck or anything.  But she’s there as a reminder.

Contrary to popular belief, we Catholics don’t worship Mary as a god.  We just really, really admire her.  She’s a good role model, I guess.  I had some vague idea that when I was in the kitchen at five o’clock, about to whack some one or other of my offspring with a saucepan (possibly because they burnt the roast, destroyed the laundry or were considering vegetarianism), I would stop, look at Mary, take a deep breath and put the saucepan down.

I was so excited when I first bought my Kitchen Mary.  It was exactly what I was looking for: simple yet special, traditional yet different.  Even so, when I first got home, I didn’t rush to the kitchen straight away.  Mary spent a lot of time in the plastic bag from the piety stall, wrapped in old parish bulletins.  You see, I wanted to wait until the kitchen was sparkling clean before I put Mary in it.  But setting to and cleaning the kitchen isn’t a straightforward task when you have little ones.  There are nappies and spills and bandaids and bath time and the kitchen mess remains.  Then it hit me (the profound thought, I mean, not the kitchen mess – though it WAS piled precariously high…): the thing I was doing with the Mary statue in my kitchen was exactly what I was doing with God in my life.

You see, I do want God in my life.  I’m sold on that point.  I’m a much better person, much more myself and I make much better decisions when I feel close to God.  But I’ve been keeping God out, just the same.  I guess, in the back of my mind I figured I’d become all spiritual when I “had it all together” or when I “had time to pray”.  It was like it was on my to-do list right next to “clear out the linen cupboard” or “tidy the random drawer”: we both know these things are never going to happen.

But God doesn’t want the perfect versions of ourselves.  God embraces our broken-ness and meets us in the mess.  So, with this in mind, I put Mary in the kitchen, mess and all.  The woman gave birth in a cattle shed, I’m sure she can cope.  You might be asking “Why Mary?  Why not a picture of God?”, well that brings me back to that thing I was saying about Mary being a role model.  I need to let God meet me in the mess and Mary was really good at doing that.  She changed baby Jesus’ nappies as a refugee in Egypt, and had to watch him die, naked and nailed to a tree, when he was an adult.   These situations weren’t tidy.  And she didn’t always have it all together (losing child in temple, anyone?) but she always let God in.

Plus, I don’t really like pictures of God.  They make him look all strange and beard-y.  Like Santa Claus on steroids.

So here’s my Kitchen-Mary in a candid shot (taken before I cleaned up the kitchen for the glamour shots above). 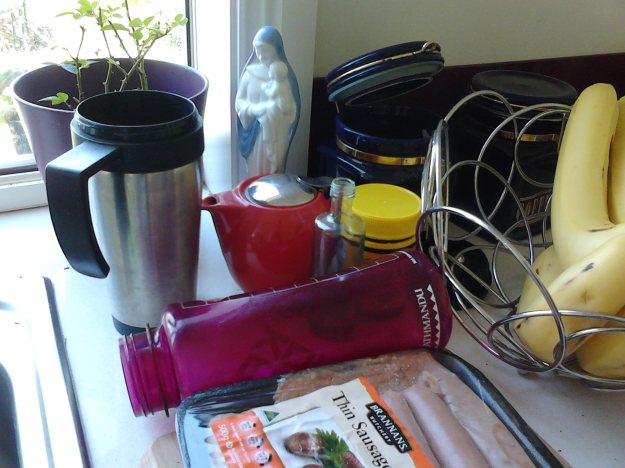 Our Lady of the Sausages, pray for us in our hour of need.

Harry did it again to the meatloaf tonight but I discovered it before things got too bad (still burnt, though).

While out with my Mum today, Christopher Robin commented that he and Harry had put a wash on, but hadn’t yet set it off and that he would remember to “press start” when we got back home.  It being 9:30 in the morning, I responded to this with “was that a dream you had, darling?”  Christopher Robin assured me that this was no dream, he and his brother had quietly achieved it whilst I was breastfeeding Annie that morning and that “Harry put too much powder in”.  I made a mental note to try to fix the situation when I got home, gently admonished Christopher Robin for putting a wash on without Mummy (“Harry started it.”) and got on with my day.

Later this afternoon, whilst preparing dinner (the ill-fated meatloaf) it struck me that I could hear the washing machine running.  True to his word, Christopher had turned on the washing machine.  Just as he said, Harry had indeed put too much powder in, on and around the machine – almost the entire box, scoop by wobbly scoop (it has always been their favourite part of the process).  There were a few items of clothing in there, too, but I think the powder proved to be more fun.

Just so you know yesterday wasn’t a one-off…

Once a fortnight, I’ve started this thing where we try to have a Sunday Roast.  Every time I open the freezer, I see the meat ready for roasting and I wink at it and whisper “soon!”.  Today was Roast Day.  I’ve been known in the past to let the day get away from me before getting the roast on and thus have a late dinner with psycho children too tired to eat, but not so today!  At 1:30pm I lovingly salted and oiled the meat, placed it on a bed of onions and surrounded it with garlic.  I chopped and parboiled the veggies and put them in the oven too.  I then turned the oven right down low, put on the exhaust fan and got the kids ready to go see my grandma. When we got home we would have roast!

On the way home from the hospital it was bitter cold and pouring down rain.  As we drove along with headlights on, we all shared one smug thought:  Roast.  Put children in warm pyjamas, fill their bellies with roast beef and they’ll be in bed asleep faster than you can say “Downton Abbey”!

As we pulled into the driveway, I said in my most important voice, “Mr Knightley, you unload the kids.  I must go in and check on The Roast!”

My first sign that something might have gone wrong was the smell of smoke.  It would seem the roast had ‘caught’.  Then I got to the kitchen.

My delightful two-year-old son, who loves to help Mummy in the kitchen, had turned the oven up to maximum before we left the house.  The kitchen was rather smoky (would have been much more so, had the fan not been on).  And the Roast was a blackened crisp.

Many things happened then:  I stormed about the house yelling to no one in particular about how hard my life is;  Matlida burst into very loud, impassioned sobs to which Mr Knightley and I (I’m very ashamed to say) growled in unison “Don’t YOU start!”;  Harry, confused as to why everyone seemed so cross at him, set to destroying the house with a kitchen whisk; Christopher Robin asked “what’s for dinner?” and Annie gurgled and kicked in amusement.

Mr Knightley, with an air of grim determination, retrieved the smoking, shrunken black mass from the oven and tried to carve it.  Beneath the thick black crust there was a little bit of good meat to pick at (Mr Knightley gave me the nicest piece).  It felt like Tiny Tim’s family from A Christmas Carol.

We had tinned soup and toasted muffins for dinner.

Afterwards, as we were cleaning up, Mr Knightley did a bit of wistful poking around the charred remains of what were once vegetables and presented me with a small morsel of onion.  “Taste this” he said in a kind voice “It’s perfectly caramelised”